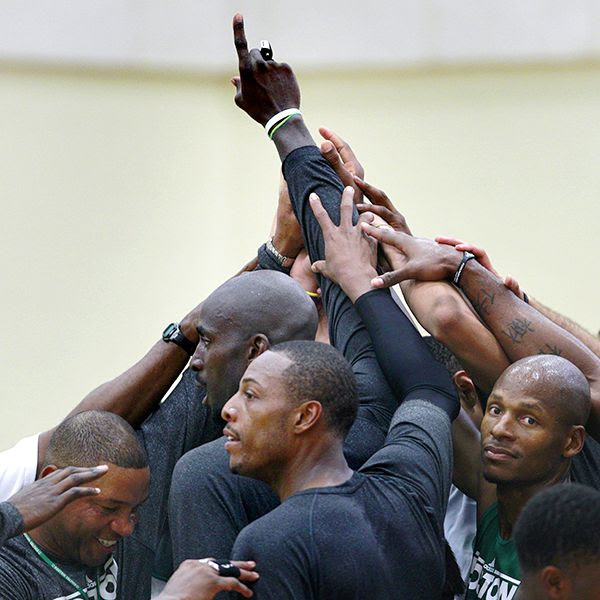 I love what I am hearing out of training camp so far.  Seeing pictures and videos of the players (Nate especially) pranking each other takes me back to the great teams of the 60's when the players used to play practical jokes and pranks on each other all the time.  Like the time Tommy used to cut through the threads on Frank Ramsey's buttons.  Or Tommy giving Red an exploding cigar.  Or, on that 1986 championship team,  Bird sneaking under the benches to tie KC's shoe laces together while he was talking.  Great teams are loose in the locker room and it is great to see this team having fun with each other.

The best news out of camp is about KG.  After the first day,  Doc was quoted as saying that KG looked "phenomenal and explosive" in the team's first practice.   Yesterday, it was more of the same.


"It's night and day [from last season]. I still wish he would take a break in practice more, but that's a whole other issue that we'll have to solve. He's explosive again, especially defensively, and that's great. He outran guys in our scrimmage earlier, at least three times. Once, he got the rebound, threw it out, and still out ran all the bigs down the floor. He couldn't do that last year, and even if he could, he didn't think he could. To me, that's the biggest change."

If that doesn't get a Celtics' fan's blood flowing, I don't know what will. Doc was also talking about the defense and that they are planning to pressure the ball up the court again this season like they did in the 2007-08 season. Last season they couldn't do that because KG just didn't have the mobility to give the help defense. But this year, that pressure defense will be back.  That's pretty exciting because that type of defense will set this team apart.

I love the fact that Shaq has named the bench this season.  They are heretofore to be known as the Boston Bench Mob.    This gives them an identity.  They will take pride in being the BBM and Shaq is taking pride in being the leader and centerpiece of that bench.    A strong bench with pride in their roles will push the starters in practice and give the starters more rest in games.  I remember Bird talking about how important Greg Kite was to the championship teams of the 80's.  Kite took great pride in his role and gave his all in practice and because of that, it made the team better.  They were challenged every day in practice and because of that, they were more prepared for the games.   This bench will have that kind of effect on the starters as they will push them to be better and at the same time, the bench will also be better.

Delonte West could very well be the steal of the summer.  Reports out of practice say that Delonte has been on the court for hours after everyone else has gone, working on his game.  Delonte is a great defender,  can score, and will always give his all out on the court.  He is coming in with the right attitude and seems to have gotten his off court problems straightened out.


"I’m just happy to be given this opportunity to do what I love," he said. "I’m lucky to be here. I’m happy to be here. I’m a soldier in Doc’s army. Whatever he needs me to do. I’ll go to war and die for this team. Playing every game, every minute this year like my life depended on it, cause it [does.] Nothing’s promised. I’ve been given this opportunity to prove to the NBA and the world that I’m a good person," West said. "I have a lot to prove and I don’t want to let anyone down."

And Perk has been at practice both days in full practice gear.  He is not walking with a limp and no brace.   He has been calling out encouragement to his teammates from the sidelines while they are scrimmaging.  He has also been shooting free throws.    It's going to be hard to keep Perk down.  The guy works so hard.  He'll be back earlier than expected and better than ever.  If nothing else, all those free throws he is shooting because he can't do anything else are going to up his FT percentage.

Perk is in the last year of his bargain basement $4 million a year contract.   I really feel for the big guy having to deal with the injury and the rehab in a contract year with a lockout looming.   I really hope Danny works out a contract extension with him.   If he doesn't I know that there will be plenty of teams in line trying to pry him away from the Celtics.  True defensive centers are a dying breed.  There aren't many out there and Perk is one of the best.    Here is how Perk feels about it:


“Really, you just put that focus into that therapy,’’ he said. “The rest is going to take care of itself. Shoot, I came up on a bad year . . . as far as the lockout coming up. So it ain’t hard. I’m pretty good with saving my money. I come from nothing, so it ain’t like it’s a big problem. I want to stay here. I told [president of basketball operations] Danny Ainge I ain’t going nowhere and I meant it.’’

I just love this kid!  Something tells me that if Danny offers Perk any fair offer, Perk is going to take it.  He's not greedy and wants to stay a Celtic.   I just hope Danny knows what we have in Perk and gets it done.

Marquis Daniels is another player who is rejuvenated this season.   He started last year playing very well and being an integral part of the rotation and then he got hurt and never made it back into the rotation on a regular basis.   He also never had a defined role last season.  Doc was forced to use him as a point guard, which he isn't.  This season he can focus on backing up Paul Pierce and I think he will surprise a lot of people.  After all, he was a starter on the Pacers and did very well.

There is no doubt that Delonte is going to make the team and be a key player for them this season.  That leaves the 15th roster spot for Von Wafer, Tony Gaffney, and the camp invitees to fight over.  It will probably come down to Wafer vs Gaffney in the end, unless someone else steps up and grabs it.  My thoughts are that Gaffney fills a need, and that is the hole behind Pierce and Quisy at the small forward spot.  He is long and is a lock down defender.   On the other hand, Wafer is a scorer and would be behind Delonte in the depth chart.   It may come down to whether they want a scorer or a defender.  Also, Delonte's 10 game suspension may have them lean toward Wafer, who duplicates a lot of what Delonte brings.   I'm on Gaffney's bandwagon.


The team focused on defense yesterday and Doc said that the goal is to get back to being #1 in field goal percentage defense after slipping to 9th last season.    The first year and a half, a big part of their defense was pressuring the ball up the floor but because of KG's injury they got away from that.  With KG's emergence as an explosive defender in camp,  Doc is hoping to once again get the team back to pressuring the ball up the floor and get that top defensive ranking back.   Satch Sanders was in the stands watching yesterday's practice and was impressed by the Celtics' defensive intensity.  Some exciting stuff!

So far, Ubuntu seems to be in full effect in this training camp.  They are enjoying each other.  They are all embracing their roles (except Big Baby who is looking for a little attention).  They are motivated and focused on one goal.   Day 3 coming up.   I can't wait!